During Sober Catholic’s inaugural year in 2007, I decided to introduce readers to St. Maximilian Kolbe. He is a patron saint of addicts. Last year, on the 75th anniversary of his martyrdom I wrote this on my other blog In Exile :

“St. Maximilian Maria Kolbe was executed in the Nazi German concentration camp at Auschwitz seventy-five years ago today for being a Catholic priest.

He was a Conventual Franciscan friar and Guardian (leader, administrator) of Niepokalanow, then the world’s largest friary and a major Catholic media center. It is located some distance west of Warsaw, Poland.

He was canonized a saint by the Church in October 1982.

In late July 1941 a prisoner escaped and as was Nazi policy, ten men from that cell block were randomly selected to be sentenced to a starvation bunker until the escapee was found (dead or alive.) In reality, the ten condemned wouldn’t be released at all, regardless of the escapee’s status.

Death by starvation and dehydration is a very slow and very painful way to die. The ten were stripped naked and placed in a cell that measured three meters by three meters (that about 9 feet on a side.)

One of the ten was a Polish Army sergeant by the name of Franciszek Gajowniczek, who, upon being selected, wailed that he was a husband and father and bemoaned the fate of his family. Upon hearing this, Fr. Kolbe stepped out of line, went forward to the commander and offered to take the sergeant’s place.

The Nazi officer was duly astounded. Perhaps taken aback and confused by this act of selfless sacrifice, he accepted Kolbe’s offer and the Gajowniczek was excused. He survived the war.

Over the course of the next few weeks, the ten died, one-by-one. Every day an attendant would go into the cell to retrieve the dead.

Prison guards and camp survivors reported that while there would typically be sounds or rage and anger, of wailing and crying and begging, during the two weeks that Fr. Kolbe was imprisoned in the cell with the others, the sounds were quite different. Hymns were sung. Rosaries said. It was as if Fr. Kolbe had turned the bunker into a chapel. On August 14th, seeing that he was still alive, the Nazis got impatient that he wasn’t dying fast enough and had him injected with carbolic acid.

When he volunteered to take the sergeant’s place, the Nazi asked Fr. Kolbe who he was. His answer?

“I am a Catholic priest.”

This was his identity, it was who he was. He died for being a priest; he died being a priest, ministering to his fellow condemned. 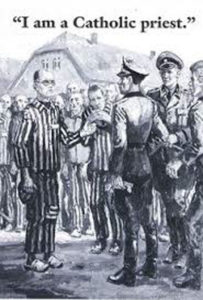 Being a priest was enough to have him targeted by the Nazis; however there was more to him than that. For nearly twenty years he published “Knight of the Immaculata,” a monthly magazine dedicated to being the voice of the Militia of the Immaculata movement he founded in 1917 (more on that, later.) This publishing venture, begun in 1922, gradually expanded over the 1920s and ‘30s to include other periodicals and a daily newspaper. Circulation was amongst the largest in pre-WW2 Poland (and significant amongst global circulations, too.) Fr. Kolbe had already launched a shortwave radio station, although it was limited at first to just being on the Amateur bands. He also had plans for a TV station. Expansion of the radio station to non-amateur broadcasting and the TV enterprise were halted by the Nazi and Soviet invasion of September 1939. Fr. Kolbe also had plans for a motion picture studio.

He was “New Evangelization” before anyone else thought of it. If you wish to get the gist of what he did and also what he planned, what Mother Angelica did in Alabama 50 years later is essentially that…”

Sober Catholic has links about him in the sidebar, as here is an Archive of Sober Catholic posts referring to St. Maximilian. Take your time to peruse them, some briefly refer to him, others give pretty good detail about him.

I bring this up as it is also time for the annual Novena to St. Maximilian Kolbe. Technically, it should have begun yesterday so that it would end on the day prior to his feast day of August 14th, but I forgot to post about it. But, beginning it today like I did so that it’ll end on his feast day is all right (in my opinion.) You can say novenas to anyone at any time of the year. It is recommended that they’re said during the “proper time” as you’re adding your intentions to the clouds of prayers rising up to Heaven like incense. But maybe doing you own thing has a better chance of getting the saint’s attention 😉

In 2007 I wrote my own Novena. Here are the links to all nine days (To my horror I discovered that the links were “broken,” directing people to a prior, now defunct version of Sober Catholic. They are now corrected.)

The Novena to St. Maximilian Kolbe for Alcoholics and Addicts:

Go outside to get outside! Sometimes I hang out with this permaculture community.